RSS
← Writing, tea, and how to beat insomnia
Thankful for weakness →

Sprinting my way through a marathon

NaNoWriMo is, once again, kicking my ass, and I am now 5,000 words behind where I should be. Cue tears of panic.

Then I recall that today is the first day of Fall Break, and besides work my only scheduled obligation is roaming through the house in my pajamas and fluffy slippers, munching on a lemon cream cheese tartelette and playing video games. Glorious. Time for a word sprint!

:: word sprint \pronouncation: effffff\: n. 1. an allocated period of time in which an individual attempts to make up a nauseating amount of words in NaNoWriMo by furiously hashing away at his/her keyboard like Shakespeare’s monkey. “Goodness, I’m so behind in my novel I better have a good word sprint tonight” 2. a mad mental dash to the writing goal finish line immediately followed by a stiff drink and/or period of comatose. “Boy I sure hope this word sprint comes with scotch.” 3. v. a cruel method of torture used by the ancient Greeks to punish young children that didn’t use proper grammar. “You’re going to word sprint today or it’s the end of your life as you know it!”

Overall, a grand old time. However, there is a bit of an issue. Let us display the problem with a fitting image. 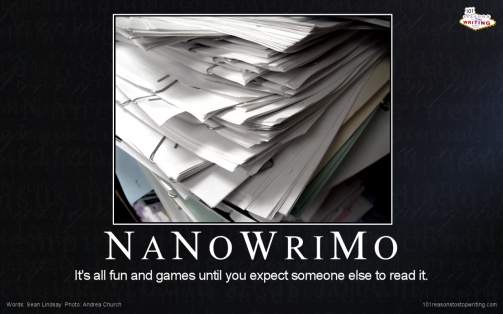 As exciting as it is to finish up a “novel” and gripe with fellow writing peers, it’s always a bit of an uncomfortable experience to spew out on paper what really goes on in your mind. Maybe it’s not a direct verbalization of your innermost thoughts, and it might not even be the darkest of desires and secrets.

But it’s you. Every word that is typed/jotted/scribbled/scratched out is something that comes from the dusty mess upstairs, and once you put two and two together it doesn’t always turn out pretty. Often times, it’s downright disturbing. By living vicariously through your characters in the world that you’ve created, at the end of the day there’s a whole lot of space in between the lines, and it’s all full of you.

And truthfully, it’s not all that flattering.

It’s like looking at those mirrors specifically designed to magnify your pores. Have you ever seen yourself in one of those? You think that your skin is creamy clear and baby butt soft, but one look at those concave mirrors has you running for the hills. Might as well scream Bloody Mary in the bathroom at night to bring out the deformed and twisted reflection you didn’t even know existed.

Of course it’s not all that bad. Writing brings out the whimsy in me that my not-five-year-old-self has forgotten. It allows me to twist and adjust parts of this world into something coherent and understandable, rather than overwhelming and jumbled. There are heroes and living myths and magic and triumphs for the good and honorable who beat down the evil doers and monsters.

Slightly jarring though, when the monster turns out to be part of you.

Posted by chibichunsa on November 21, 2011 in Uncategorized

← Writing, tea, and how to beat insomnia
Thankful for weakness →